In Spring 2019, I started working on a Digital Humanities project entitled, “The Speech that Settled Kansas: Eli Thayer’s Rousing Lecture” which was both challenging and fascinating for me. It is challenging because it deals with an 1854 speech by Eli Thayer, which has long been absent from the archive; fascinating as the absence has given me much opportunity to engage myself in the maze of archival research. Spending almost a year looking for a ten-page speech that is closely related to the local history of Manhattan and Kansas State University, on February 7, 2020, I finally had a glimpse of the historical document that inspired thousands of East Coast revolutionary people in 1854 to move to Kansas with a vision of including it as a free state in the union.

The speech that was delivered on December 5, 1854 in Franklin Hall, Rhode Island is now preserved in box 10, folder 8 of Thayer papers of John Hay Library at Brown University. It is a huge archive of more than 5,000 documents including Thayer’s correspondences with activists, unpublished manuscripts of books, personal notes of speeches, official letters written to Thayer, news articles portraying Thayer and New England Emigrant Aid Company’s contribution to the Kansas Crusade, articles published by Thayer on newspapers, list of shareholders of New England Emigrant Aid Company with the amount they spent to buy the shares and primary documents like train tickets from Boston, Massachusetts to St. Louis, Missouri, etc. related to the westward migration of the mid-nineteenth century. 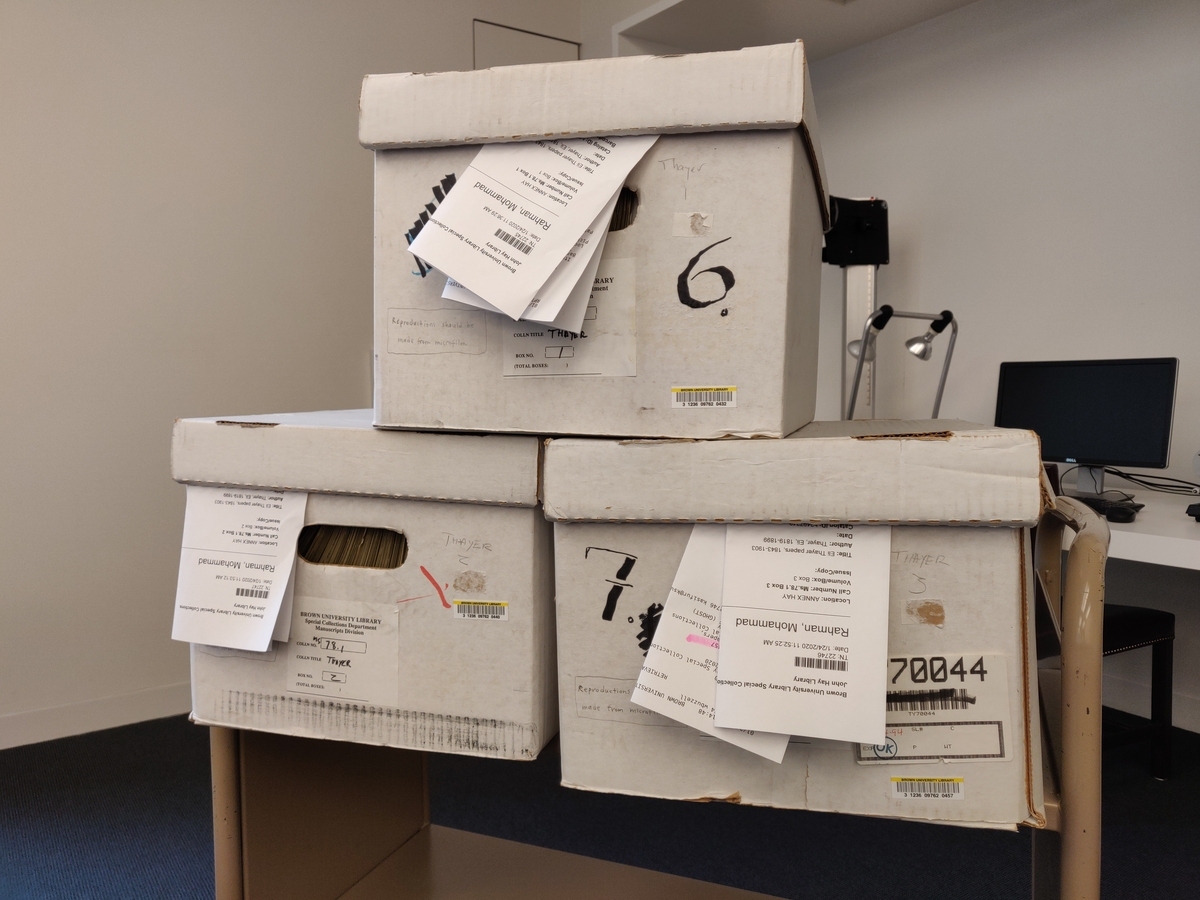 The materials are kept in fourteen boxes, each box having 22 folders on average. Since most of the folders are chronologically organized based on the date of composition or publication, each of them contains 20-50 pages (a rough estimate). I faced the problem of locating the desired speech as it was kept in one of the undated miscellaneous folders. Before holding the actual notes of the speech in hand, I had to spend three full days looking for it in this never-ending labyrinth of historical documents. Four days are not enough to explore the entire archive as there are varieties of historical documents that need special attention considering the materiality, content, writing style, and preservation techniques of the documents. I wish I could spend a month exploring these materials there!

The most fascinating documents along with the speech were the letters between Eli Thayer and Isaac Goodnow, a co-founder of Kansas State University who migrated from Worcester, Massachusetts to Manhattan, Kansas in March of 1855 after listening to the lecture by Thayer. I saw the name, “Manhattan, K. T. (Kansas Territory),” for the first time written on any document after its establishment in one of Goodnow’s letters. These letters, dated from 1858 to 1891, talk about the social and political situation of Kansas Territory as well as about the Bluemont Central College, which later became Kansas State University. On the letter dated May 24, 1858 Goodnow writes to Thayer,

You have had a powerful turning influence in bringing us out here. You well know that we came to battle for freedom & a pure Christianity, & now when the victory in the main is won we wish to make the results certain by seeing well to our schools and Churches.

Goodnow, requests Thayer to convince senators Harlan and Wilson on the question of the land grant of 1,00,000 acres for the agricultural department of the college in this letter. In the same letter he portrays his plan of collecting fund for putting up the first “college building” from June 1858. Going through these earliest documents was the most exciting experience for me as I am a student of this institution now. The quest that I started in February 2019 took me to Providence this month. While I was making the eight hours’ journey by air from Manhattan to Providence (including layovers) I was thinking how hard it was for the East Coast activists to take a voyage of 15-20 days by train, steam boat and wagons with all their belongings from Boston to Manhattan in 1854-1855. Kevin G.W. Olson writes about the illness, death and sacrifice of these people in his Frontier Manhattan. 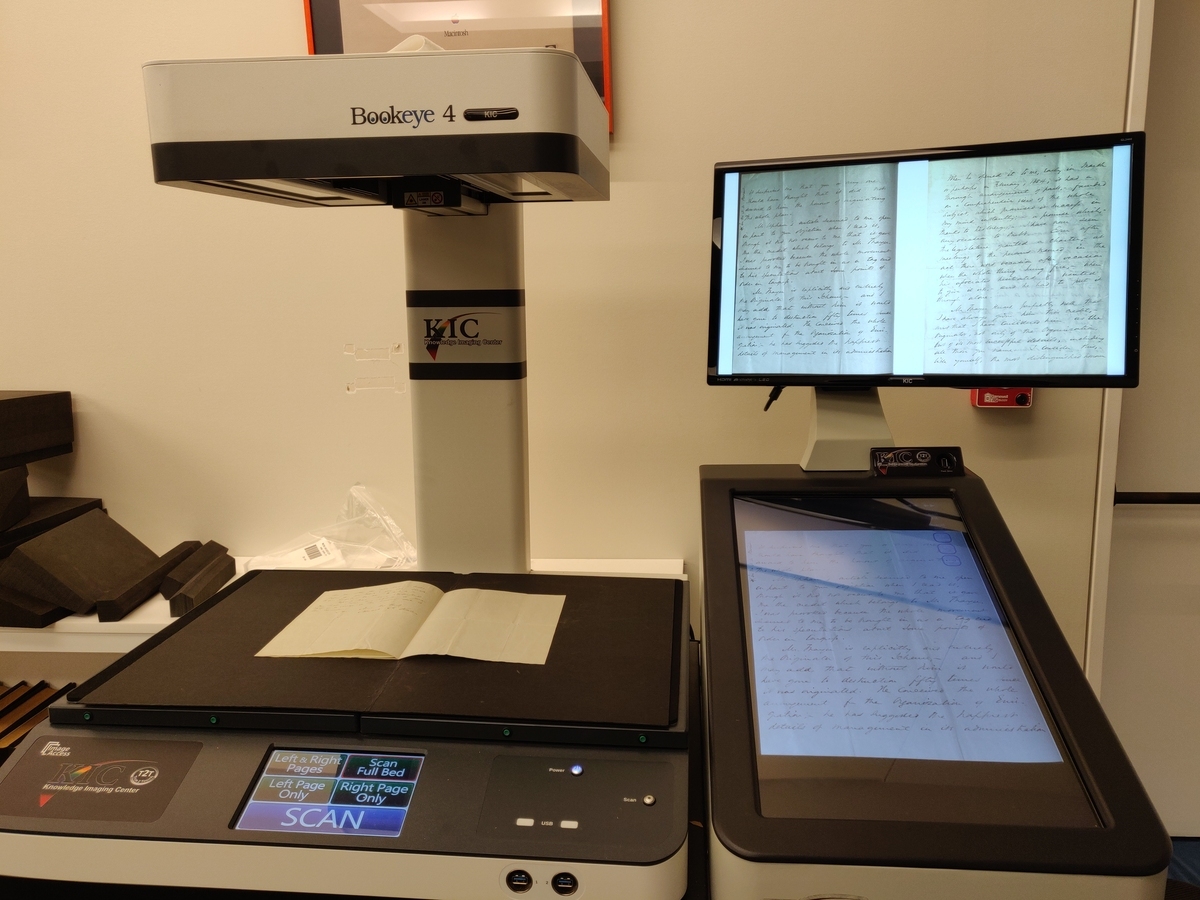 My visit to Brown University Special Collections has changed my perspective on archival research. At the end of summer of 2019, I got a scanned copy of the speech when special collection librarian Holly Snyder sent it through email. As I was transcribing it, I had confusion regarding some of the words from the document. I applied every measure to decipher those words by printing that document, editing through picture tools, zooming in the document on large screens at Hale Library, showing them to other people, but though I could solve some of the problems, many other words were still unclear to me. When I finally got the document in hand, with the help of John Hay Library Special collection’s curators I solved the rest of the problems. I was immensely benefitted by their input as they helped me deciphering old handwriting applying their expertise. It gives me the idea that though in the digital age we tend to duplicate every document using newer technologies, there are still limitations and gaps in these technological appliances, and the originality of archives cannot be replaced. I have much respect and love for the librarians of special collections. I believe patience and continuous search may always yield surprising results in archival research.

Preservation & Archiving, Research
This site is part of the HASTAC network on Humanities Commons. Explore other sites on this network or register to build your own.
Terms of ServicePrivacy PolicyGuidelines for Participation